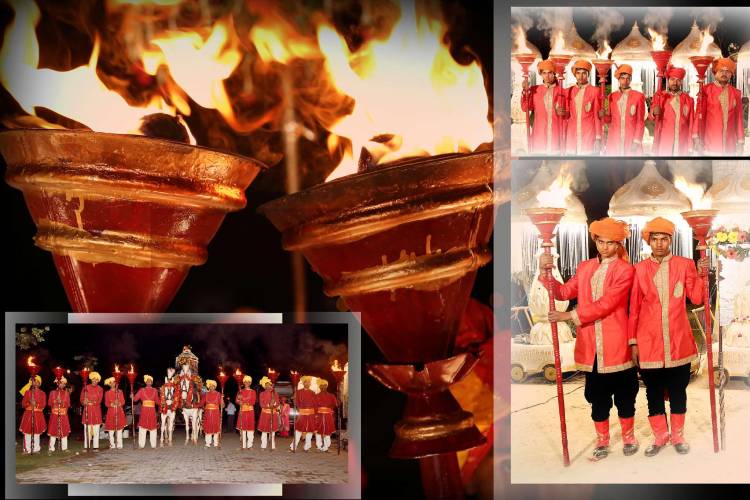 The Indian wedding ceremony is a very elaborate affair where every aspect of the bride and groom’s lives is celebrated. The event lasts for days, from the pre-wedding preparations to the reception. One of the main components of this celebration is the Baraat or procession. This grand procession starts at the bridegroom’s house and ends at the bride’s home. During this time, both families perform various rituals and celebrations.

One of these rituals involves lighting lamps during the Baraat procession. These lights symbolize prosperity and good luck. They also serve as a reminder to a couple of their commitment to each other.

While this ritual has existed since ancient times, the exact method of using them has not changed much over the years. In modern weddings, the tradition continues with the use of LED lights.

Modern versions of the procession substitute oil lamps with electric lights or Mashaals, and a band playing the newest music precedes it. All of the band members are uniformed. Along with the parade, some men are walking while holding petromaxes. The bridegroom’s entrance and the use of lights in Indian best wedding band ceremonies have changed over time. In modern times, LED lights are now commonly used. They are cheaper and brighter than incandescent bulbs and last longer.

LED lights are becoming more common in India’s wedding ceremonies. They offer better lighting options and save energy compared to other light sources.

From ancient to modern times, the one thing that has not changed as a lighting prop for baraat is Mashaal. Here is a brief information about Mashaal, read on.

Mashaals are Indian torches which are prevalent in usage since ancient times. Mashaals were used as a light source in ancient times. The constituents used in the torch are oil-soaked cloth and grass. The one end of the torch is stuffed with dry grass and oil-soaked cloth, and it was set on fire. The other end of the torch is easily held by hand while walking. In present times, we have various alternatives for torches. Nowadays, mashals are mainly used as a decorative prop at parties and weddings.

If the groom is making his entry on a baggi for marriage in delhi, then to match the grandeur of the carriage, mashals can be used as the lighting option. Mashal bearers accompanying the chariot will give a glimpse of an ancient era.

Weddings are happy occasions filled with dancing, music, partying, and sheer merriment. Since most wedding ceremonies take place at night, the location is decorated with bright lights, bunting, and other ornamental items.

Established in 1963, Shiv Mohan Band is one of the oldest and most prestigious bands in Delhi, with services ranging from dhol wala in delhi, lights, Mashaal, vintage car, baggi and much more. Make unforgettable memories with Shiv Mohan Band.