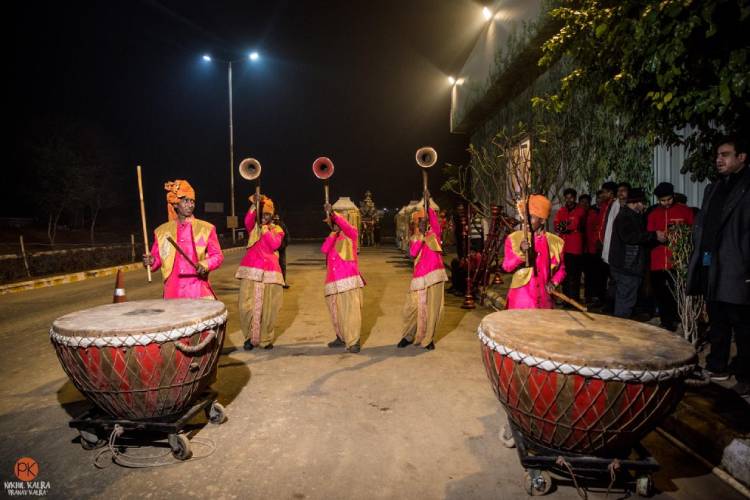 The naghara, the chief instrument in tribal festivities and weddings, comes in various styles. The naghara varies in size and is known by alternative names like “boyuk nagara,” “cura nagara,” “chiling naghara,” and so on. It is primarily used as a festival instrument in Southern India’s Hindu temples. The size of this instrument may vary, and it is kept close to the entrance of the Hindu temples of South India.

This musical instrument is mostly used by temple staff. It has been learned that approximately 18 musical instruments were performed throughout the pooja times, special occasions such as consecration, temple festivals and fairs and procession timings such as car procession, float festival, and palanquin celebration processions. During the 18th and 19th centuries, these tools were immensely popular.

Nagara in different states of India

Nagara is a wood, iron, metal, & leather percussion tool. This traditional instrument can be found throughout India, such as in Madhya Pradesh, Himachal Pradesh, & Bihar. Primarily used by Madhya Pradesh’s ‘Ho’ tribes. Also used in the Bihar ‘Seraikella’ Chhau dance and for festive instrumental with ‘Shehnai’.

What is the sound of Nagara?

The skin-covered hand drum used in temple ceremonies and rituals is a Nakarai. A quarter metal vessel serves as the foundation of Nakara. Nakara’s metallic component would most likely be either copper or brass metal. The instrument’s membrane may be made of goatskin or a similar skin. Metal strips are used to secure the membrane to the metal vessel. The tool will be booming when played with special hammers or bent sticks.

The goal of enjoys playing Nagara while communicating with the audience through rhythmic sound. The Nagara drum is used on various occasions, including marriage, especially at Rajasthani weddings.

Nagara can also be played with sticks. The Nagara is now frequently used to accompany Shehnai, an essential instrument at any Indian wedding bands in delhi . Shiv Mohan Band has Nagada Players with exceptional talent who will perform magnificently at your best wedding band .The Nagara, also known as the Nagada, is a pair-played drum that has a round back & a concealed head. It is also classified as a ‘kettle drum’ membranophone. The words naqqarah and naqqarat are derived from the Arabic verb ‘naqr,’ which means “to strike, beat.” In India, the word ‘Naqqara’ is pronounced Nagara or nagada. This instrument is coupled with kettledrums, traditionally used in the Naubat “Nine Things,” a nine-instrument ensemble.